The seventh annual Wabun Youth Gathering held at the Eco Centre Lodge in Elk Lake featured workshops dealing with the critical issues such as suicide prevention, family violence and bullying. Role playing and skits based on traditional and cultural teachings were utilized to educate participants. Eighty Wabun youth attended the event which ran from July 15 to 26 and was sponsored by Wabun Tribal Council Health Services. 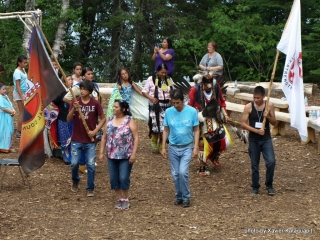 The event was divided into two parts. The first week from July 15 to 19 was held for junior youth aged from eight to 12 and the second week from July 22 to 26 was for senior youth aged 13 to 18. The first week of events featured facilitators Craig Fox of Wikwemikong First Nation and Dana Cosgrove of Mattagami First Nation. Fox , a traditional teacher and dancer, instructed the male youth on preparations and ceremonies concerning Pow Wows and dance. Cosgrove provided presentations for female youth in traditional dances, teachings and songs.

The end of first week was celebrated with a mini Pow Wow on July 18 developed and performed by the youth.

The senior week featured a series of workshops by Clayton Small, who led discussions and education on suicide prevention skills and peer support. Small, a northern Cheyenne Native American who is based in Albuquerque New Mexico is an aboriginal leadership specialist that promotes primary suicide intervention techniques. Small also holds a Masters in Education and once held the position of secondary school principal.

Jean Lemieux, Health Director, Wabun Health Services pointed out that she has seen positive changes in the Wabun First Nations as a result of the Wabun Youth Gathering and the various workshops produced by the health department.

“We understand that we must work with our youth from an early age and give them the skills and tools they need to become productive and healthy adults,” said Lemieux. 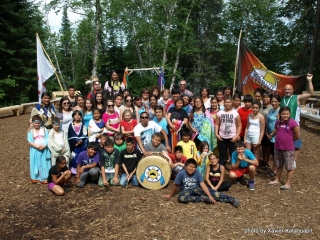 Wabun Youth participants who have been attending the event over the years move into chaperone positions to assist the organizers and facilitators.

“I am kind of amazed that they asked me to help as a junior chaperone this year. I always look forward to coming to the gathering and it has helped me in so many ways through all the traditional teachings we get here,” said 14 year old Brent Boissoneau of Mattagami, First Nation.

For the first year ever the featured drum and singing group came from a Wabun community. The Big Bear Claw Singers of Brunswick House First Nation, led by Jason Saunders performed traditional songs.

Elder Vina Hendrix, Matachewan FN, who has been attending the gathering for years was once again on hand to provide teachings to the youth.

“This is one of the best things that has ever happened to our First Nations and it provides the opportunity for our youth to gather with each other, our leaders and elders to learn more about our culture and traditions,” commented Elder Hendrix.

Chief Walter Naveau of Mattagami First Nation, Chief Elenore Hendrix of Matachewan First Nation and Chief Marcia Martel Brown were on hand to lend their support and counsel to the event organizers and young people in attendance.

“These young people are our leaders of tomorrow and it is up to us to make sure we do all we can to assist them to become strong and healthy. It makes me feel very proud and optimistic to see these Wabun youth learning our culture and traditions,”said Chief Naveau. 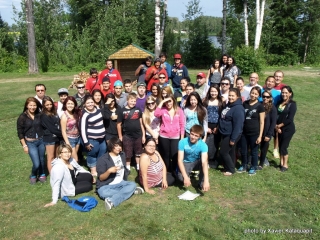 Chief Hendrix and Chief Martel Brown congratulated the event organizers and youth for producing over the years what has become a major First Nation event.

Mike Archer, Community Crisis Coordinator, Wabun Health Services has been coordinating the event for the past seven years.

“The Wabun Youth Gathering is the kind of healing that we need more of in our First Nations because it is based on the teachings of tradition and culture. We can only progress and make things better for ourselves as First Nation people if we decide that we really want change and to develop healthy and strong communities,” said Archer.

Morris Naveau, and elder and a residential school survivor was on hand to assist with the senior Wabun youth and to share his story of struggle and survival.

Veteran senior Wabun youth participant Samuel Kloetstra of Mattagami First Nation pointed out that the event has provided him with confidence and many skills to deal with life. In fact he was selected to sit on the Minister of Ontario’s Student Advisory Council as an Aboriginal representative.

The Wabun Youth Gathering came out of the vision and guidance of the late Elder Thomas Saunders, Brunswick House FN, who wanted to see the Wabun communities coming together in one gathering. Wabun Tribal Council is a regional territorial organization which represents the six First Nation communities of Beaverhouse, Brunswick House, Chapleau Ojibwe, Flying Post, Matachewan and Mattagami in Northeastern Ontario and it is directed by its respective Chiefs.