“I am here today to show my support for the Wabun youth and to encourage them in their participation of workshops where they are learning traditional and cultural teachings of our people.  I have also brought along some of our college and university summer students that are working for NAN so that they can step forward as role models for our young people,” said Grand Chief Beardy.

“My message to you today is to keep working hard and striving and to remind you that our strength as a people comes from our language, culture and traditions.  You are our future and with so many opportunities available today, you have to make sure you have an education,” said Deputy Grand Chief Waboose. 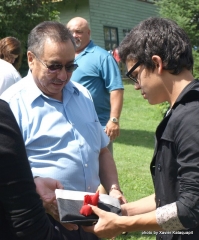 Dr Faries and Cheechoo conducted a presentation on NAN First Nation Governance, an initiative involving the sectoral negotiation process to achieve self-governance agreements in areas that affect the lives of the members of the First Nations of NAN.

“It is important for us to communicate to our youth what is involved in this process and to receive input from these young people,” said Dr Faries.

The event was divided into two parts.  The first week from July 18 to 22 was held for junior youth aged from eight to 12 and the second week from July 25 to 29 was for senior youth aged 13 to 18.  In the first week facilitator Barney McLeod, a popular international Aboriginal soap stone sculptor and Matachewan FN member conducted workshops that led to the junior youth producing their own soap stone carvings.  He was assisted by his partner Karen Clark.

The senior week featured Byron Edgar, an Aboriginal facilitator from Manitoulin Island who is involved in youth leadership training and prevention of suicide, gangs, violence, bullying and substance abuse.  Another facilitator, Percy Trapper, an Aboriginal musician, originally from Moosonee, on the James Bay coast, conducted a presentation on life skills using his own success story. 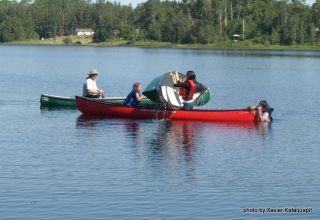 “I really enjoyed the opportunity to learn about our traditional teachings and culture.  I want to thank our Wabun Chiefs for giving us the opportunity to have this gathering every year,” said senior youth, Lynne Cormier, Matachewan FN.

Elder Vina Hendrix, Matachewan FN, led the group in opening and closing prayers and she was instrumental in assisting everyone with traditional and cultural knowledge.  Chief Marcia Martel-Brown, Beaverhouse FN took part as a chaperone for youth and performed a traditional drum ceremony assisted by Michael Lafrenier, a senior youth also of Beaverhouse FN.

“I want to thank Mike Archer who does such a good job of coordinating this youth gathering every year and I give thanks to Jean Lemieux, Wabun Health Director for her support in making this event possible,” said Chief Martel-Brown. 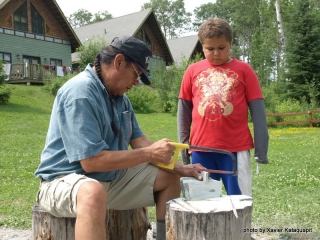 Chief Alex (Sonny) Batisse of Matachewan FN also visited to show his support for the gathering.

“I am so proud and grateful to be part of the Wabun Youth Gathering.  Over the years, I am amazed at all of the growth I have seen in our young people who have participated in these events.  I am also thankful to our Wabun Chiefs for making the event possible and to Health Canada for funding we have received over the years,” said Mike Archer, Community Crisis Coordinator, Wabun Health Services.

The Wabun Youth Gathering came out of the vision and guidance of the late Elder Thomas Saunders, Brunswick House FN, who wanted to see the Wabun communities coming together in one gathering.  Wabun Tribal Council is a regional territorial organization which represents the six First Nation communities of Beaverhouse, Brunswick House, Chapleau Ojibwe, Flying Post, Matachewan and Mattagami in Northeastern Ontario and it is directed by its respective Chiefs.