Trent Agawa of Brunswick House First Nation is feeling good about himself these days and he claims he owes much of that to his participation in workshops at the Third Annual Wabun Youth Gathering.  He was one of many young First Nation people from the seven communities of Wabun Tribal Council who benefited from the gathering at the Elk Lake Eco Resource Centre in Elk Lake, July 20 to 31.  The event which was hosted by Wabun Health services was dedicated to teachings and workshops dealing with survival skills, culture, tradition and suicide prevention. 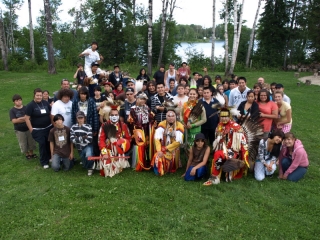 “When I came to the first Wabun youth gathering three years ago, I was shy and having lots of problems.  Today I feel better about myself and I think that has a lot to do with what I learned at workshops that I participated in.  This year I was invited as a chaperone and I had the responsibility of taking care of younger children,” explained Agawa.

The gathering which drew over 80 youth, the largest turnout of Aboriginal youth from the Wabun area in three years, allowed the event organizers to accommodate two separate age groups.  The first week saw youth from the ages of 8 to 12 and the second week brought in young people between the ages of 13 to 18.  The gathering provided youth with education in traditional and cultural teachings as well as workshops and presentations on suicide prevention, social skills and exposure to support services and programs.  The annual Wabun Youth Gathering features young participants from Wabun Tribal Council’s First Nations which include Chapleau Ojibwe, Beaverhouse, Brunswick House, Flying Post, Matachewan, Mattagami and Wahgoshig.  Elders Marie Boucher and Vina Hendrix, both of Matachewan First Nation provided spiritual support for the gathering.

All seven Wabun Chiefs have made the youth gathering a priority program for Wabun Health.

“Our young people are our future.  I am here today to encourage everyone to continue with the Wabun Youth Gathering.  This is changing lives and we are seeing good results in the young people in our communities,” said Chief Dave Babin, Wahgoshig First Nation, who made a special appearance at the event. 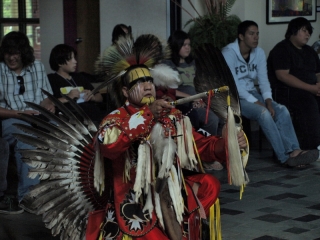 In the first week of the gathering, 30 preteen participants took part in a series of workshops titled ‘Little Eagle Clan’ for ages up to 13.  These workshops provided an age appropriate series of hands on presentations to introduce younger participants to traditional activities and cultural teachings.  Workshops in the first week were facilitated by Mimi Tremblay, Adam Sackaney and Bear Babin, all of Wahgoshig First Nation.

The second week featured workshops under the banner of ‘Eagle Clan’ for 53 youth between the ages of 13 to 18.  These teens participated in more in depth workshops that were facilitated by members of the Yellow Ribbon Dancers, from Edmonton, Alberta.  The traditional dance group included Angela Gladue, Adrian LaChance, Rocky Dumais, Erin-Nicole Meetoos and Leo Lentendre.

Mike Archer, Community Crisis Coordinator, Wabun Health Services, who acted as event organizer, pointed out how three older teenagers, who have become active participants in past youth gatherings worked as chaperones for younger participants this year.  They were Agawa, Jamie Roy of Matachewan FN and Lorelie Matthews of Wahgoshig.

“These three young people have provided an excellent example for others in their community.  They started off as shy individuals that did not really want to participate in their first workshop but over the years their confidence has grown to the point of wanting to assist us put these events on for other young people,” said Archer. 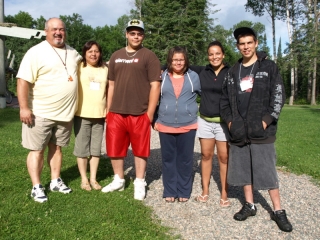 Jean Lemieux, Health Director, Wabun Health Services explained that it is important to provide youth with the opportunity to make positive changes in their lives, further their education and to have the ability to deal with important social issues such as suicide.

The event was hosted by Wabun Health Services a department of Wabun Tribal Council.  The gathering was made possible through funding provided by the National Aboriginal Youth Suicide Prevention Strategy.  The strategy was established in the fall of 2004 by the government of Canada and with the support of the Assembly of First Nations (AFN), Inuit Tapiirit Kanatami and the First Nations and Inuit Health Branch of Health Canada to address the issue of high suicide rates among Aboriginal young people.  The overall suicide rate of Aboriginal youth has been identified as being five to seven times the national average and that the rates increase further north in Inuit territory to eleven times.  The suicide prevention strategy has made it possible for Aboriginal communities to cope with these statistics through the creation of educational, information and support programs.