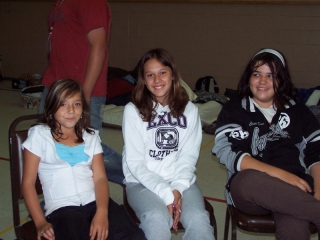 Wabun First Nation youth were brought together to take part in educational presentations at the ‘Youth Life Prevention Skills’ workshop that was hosted in Mattagami First Nation this summer.  The two day event took place on August 8 and 9 and it was attended by more than 60 young First Nation members from all of Wabun’s First Nations.  These participants, aged eight to 18, who were accompanied by chaperons and parents took part in educational workshops that dealt with three key points. These included: living in family violence, teen suicide and addictions. In addition, a Lacrosse clinic was held that featured instruction by nationally recognized athletes in the sport.  The two day workshop was made possible by Wabun Health Services, Mattagami FN and contributing sponsors.

“This was a very successful event for our Wabun communities.  We wanted to organize an event that would bring our youth together and provide them with some of our people’s traditional understanding of issues they may encounter.  However, we also knew that young people also want to be active so it was natural for us to include a native based sport, one which traditional people know as the creator’s sport of lacrosse.  We had originally planned for a small event but as it came together there was great participation from all the communities.  At one point we had just under 100 youth taking part in the workshop,” said Mike Archer, Regional Crisis Coordinator for Wabun Health Services.

Archer worked with Jean Lemieux, Health Director for Wabun Health Services to coordinate the event with the help and support of Wabun community members.  The workshop event featured Herb Nabigon, who is part of the Laurentian University, Native Human Services department. He conducted presentations on family violence, teen suicide, traditional teachings and medicine teachings.   Nabigon is a prominent speaker on traditional teachings and as well he is an author on the subject of addictions and traditional understanding.

The lacrosse clinic was led by Kevin Sandy of Six Nations. He  is general manager of the Iroquois National Lacrosse Team and provides lacrosse clinics for youth across North America.  He was assisted by 21 year old Cody Jacobs and 24 year old Thomas Montour, who are team members of the Chicago Shamrox in the National Lacrosse League.
The event was held in Mattagami FN due to the community’s available facilities for such an event. 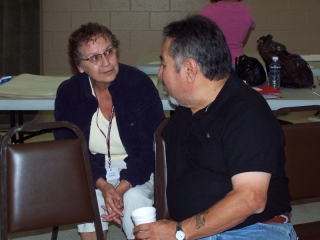 “We thought Mattagami FN would be best suited to host this event as it has a large indoor complex with gymnasium, outdoor space and a covered outdoor rink,” said Archer.

Participants and their chaperones stayed as a group at the Mattagami Complex gymnasium and their daily meals were prepared and served by community members.  Buses were chartered for each of the communities to transport youth participants to the event.  Retail outlets in Timmins provided their support by donating gift packages for participants.  These sponsors included: Staples Business Depot, Walmart, Sportscheck, Source For Sports, Quinns Sports and Grand And Toys.  During the lacrosse clinic, Sandy and his players also provided team shirts and autographed material for participants.

“The workshop covered many areas that we are addressing at Wabun Health including crisis response to teen suicide, family violence issues and addictions.  We wanted to give as much information as we could to these visiting youth and provide them with some fun too,” said Archer.

Organizers are now reviewing the two event and they are considering developing another for next year.

“The children really enjoyed the event and they were already asking if there will be another one next year.  This is the first time we have organized such a gathering and there were many things we learned.  We have many events and projects for the year for all our members and their communities.  However, we are hoping that this youth workshop and gathering can become a regular event that would provide youth with the opportunity to learn traditional and cultural teachings,” said Archer.

Mattagami FN Chief and Council provided their full support for the event and made their facilities available for organizers and participants.  A sacred fire was lit and traditional teachings and story telling was provided by local Elders.

“We would like to thank Chief Walter Naveau and his Council for their support of this event.  They made sure we were comfortable in their community.  We also want to thank local health workers Darlene Naveau, Eileen Boissoneau and James Naveau for helping us to put this event together in their community.  A lot of credit goes to Jean Lemieux for organizing and coordinating this event with Mattagami.  We are grateful to the community of Mattagami First Nation for being such generous hosts and a big thanks goes out to the youth that participated,” said Archer.