Jean Lemieux and Mike Archer of Wabun Tribal Council Health Services took the healing dream of the late Elder Thomas Saunders and made it a reality with the creation of the annual Wabun Youth Gathering. 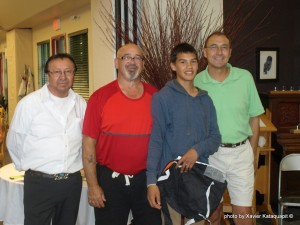 “It was always my goal to create a First Nation youth gathering and when I joined Wabun I was happy to find that this idea was something that gelled well with the wishes of prominent Brunswick House Elder, Thomas Saunders and Wabun’s Health Director Jean Lemieux,” explained Archer who heads up the gathering and works as the Wabun Health Community Crisis Coordinator.

Jason Saunders a traditional drummer and singer from Brunswick House First Nation was on hand to assist facilitators Clayton Small and Craig Fox during the two week youth gathering.

“It makes me feel so proud to be part of the Wabun Youth gathering and to serve in the memory of my great uncle Thomas Saunders,” commented Jason Saunders 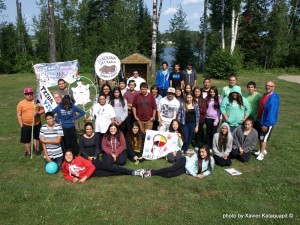 This year the annual gathering celebrated its eighth year in the wilderness setting at the Eco Centre Lodge in Elk Lake. Dozens of Wabun youth attended the event which ran from July 14 to 25 and was sponsored by Wabun Tribal Council Health Services.
The event was divided into two parts. The first week from July 14 to 18 was held for junior youth aged from eight to 12 and the second week from July 21 to 25 was for senior youth aged 13 to 18. The first week of events featured facilitators Craig Fox of Wikwemikong First Nation, a traditional teacher and dancer who instructed the male and female youth on drumming and singing.

The senior week featured a series of workshops by Small, a northern Cheyenne Native American based in Albuquerque New Mexico who is an aboriginal leadership specialist that promotes primary suicide intervention techniques. Small also holds a Masters in Education and has many years experience as a secondary school principal.

“I have been coming to this gathering for years now and I am really thankful that people like Mike Archer and Clayton Small can provide us with teaching and hands on information that helps us deal with things like suicide, teen pregnancy and bullying,” commented 16 year old Jason Therriault of Mattagami First Nation.

Julie McKay, Assistant Wabun Health Director, presented the junior youth with gifts and certificates in appreciation of their participation. 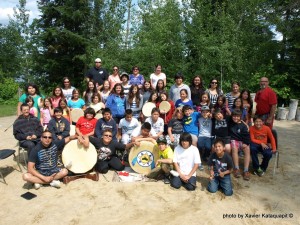 “I am so proud of our Wabun Youth I met during my visit to our gathering and I am convinced that we are doing a great job in helping our young people develop through traditional teachings. Many thanks to Jean Lemieux, Mike Archer and our Wabun Chiefs for making our circle strong,” said McKay.

The featured drum and singing group came from a Wabun community. The Big Bear Claw Singers of Brunswick House First Nation, led by Jason Saunders performed traditional songs with the guidance and teachings of Fox.

Morris Naveau, an Elder and a residential school survivor from Mattagami First Nation was on hand to lead the groups in prayer and assist with teachings.

“It makes me feel so good to see all these young Wabun people going on this healing journey through our annual gathering. What they are learning here will help guide them in the future and prepare them for leadership roles,” said Naveau.