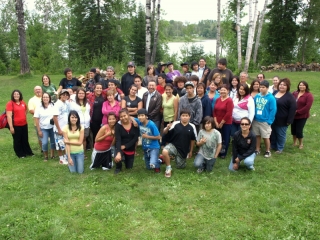 “Our youth are our future.  We need to nurture them so that we can help them create a future that we can all be proud of.  I feel that there should be proper support for events such as this from government and from our First Nation leaders.  When young people gather like this, they need to know that their communities, their people and their leaders are there to support them,” said Grand Chief Beardy.

Chokomolin provided a workshop for youth on creating a traditional hand rattle.  He explained that one of the reasons this event came together was due to the lack of traditional knowledge that was being taught to youth.

“I have met many young people who have asked me where they come from and why they could not find anyone who taught native spirituality and traditions.  I was happy I was asked to attend this year’s event, to share some of the knowledge I have.  It is important for we as adults as well because when we are here with our youth, I feel that I am learning much from them also,” said Chokomolin.

On another day of activities during the first week, Brown led the Little Eagle Clan group in creating dream catchers and shared her knowledge on the teachings of this traditional craft.

“All these youth come from the Wabun territory and this event gives them a chance to meet new friends.  When they are sitting at the tribal table as adults, they will look back on these gatherings.  The  friendships and connections they started here will benefit all our communities in the future,” said Brown.

Chad Boissoneau, former Chief and councillor of Mattagami FN has been involved in the forestry and resource development fields for many years so it was a good fit that he provided a workshop on ‘compass, map reading and learning about our trees’. 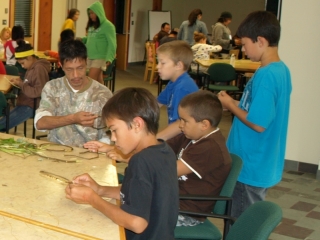 “I never had this type of opportunity when I was young.  It is awesome that our youth get to be involved with other communities and different age groups.  The last few days have been spectacular and I am thankful to our Wabun communities for sponsoring this youth gathering,” said Chad Boissoneau.

Little Eagle participants experienced many activities during their week which included plenty of traditional teaching.

“We went swimming and we had a lot of fun with our chaperones.  It is very fun and I met new friends from Matachewan and Wahgoshig,” said Hailey Perreault, Brunswick House FN.

The two week long event also provided the opportunity for young people to swim and play in their free time as the resort is located on waterfront.

“It has been an amazing experience for all of us because we get to do things we don’t usually do so coming out here is fun,” said Gabrielle Elizabeth St. Jean, Beaverhouse FN.

The Little Eagle’s week of events provided younger individuals with hands on learning workshops.  This gave an opportunity for facilitators to provide cultural teachings while also providing youth with traditional items such as the rattle and dream catcher to take home.

“Our theme for this gathering is the teachings of the seven grandfathers, one of which includes the teachings of trust.  We need to teach our young people the ability to trust our Elders, trust one another and trust themselves.  So one of the goals of this gathering is to teach them how to build build relationships, how to deal with socializing and being able to trust one another,” said Mike Archer, Regional Crisis Coordinator, Wabun Health Services.

On Thursday July 29, during the Eagle Clan week of events, Grand Chief Beardy, NAN attended the gathering with a delegation from his office.  Grand Chief Beardy provided a presentation to youth where he spoke about the current state of progress in the NAN territory but also to ask for feedback and input from the youth in attendance. NAN representatives who attended the event with Chief Beardy included: Catherine Cheechoo, Oshkaatisak Coordinator; Christine Simard, Director of Women’s Development; Deanna Therriault, Director of Communications; Luke Hunter, Land, Rights, and Treaty Research and NAN Summer Student Melinda Tate, Deer Lake FN. 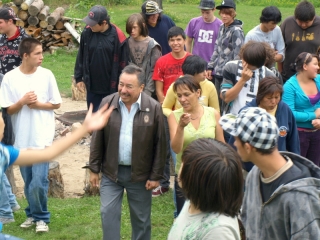 “We wanted to make good connections with the youth to our ancestral ways in conducting ceremonies.  We were supported by our Elder who was also instrumental in teaching me what I know now.  This gathering was a way for us to share the teachings and experiences we have gained over the years,” said Lachance.

The Yellow Ribbon Dancers also led the senior youth in the traditional and ceremonial practices of building and using a sweat lodge.  The traditional dance group provided workshops on native spirituality, traditional teachings, as well as drug and alcohol issues, suicide and social youth issues.

“We share the traditional teachings with others by speaking but also through dance.  We share our stories through the movement of our feet and even our regalia offers teachings for others to learn from.  When we begin to move we acknowledge our creator and share our dance with the people who are around us.  We are thankful to the organizers for having us here and we are also grateful to the youth for coming out to participate and opening their hearts and minds to learn about our traditions and culture,” said Dumais.

Lachance, Dumais and Pahtayken performed traditional dance in full regalia for participants and guests during the second week of the gathering.  They also provided workshops on the history, types and ceremonies of traditional dances.

“The youth here have been really amazing.  I enjoy showing others what I have learned about the different dances used by our people.  I even got them to learn some of the dance steps.  It was enjoyable to work with them because they were open to try new things even though they were shy to start,” said Pahtayken. 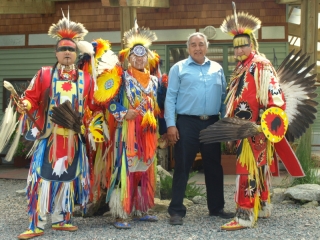 Many of the youth attending this year’s event have actually participated in the gathering in previous years.

“ It felt good to learn about my culture, about life and what I have to do to be positive.  I learned a lot this year and in past years.  I am really thankful to the communities that have supported this event,” said 16 year old Rachel Corbiere-Tangie, Brunswick House FN.

Seventeen year old Aaron Lockwood, of Wahgoshig FN explained that the workshops provided him with an insight into many of the issues affecting his community and how to deal with them.

“I am learning about how stay positive and it helps by making new friends.  I don’t really know much about my culture and this is the most I have learned about my background.  It has been an honour to be here and I hope to come to these gatherings again in the future,” said Lockwood.

Eagle Clan Chaperon Chaperone Sandra Roy, Matachewan FN, who works with Kunuwanimano Child & Family Services explained that the Wabun Youth Gathering has provided her work with the added support she needs to help her community members.

“I think it is very important for our youth to have an event such as this as it allows them to be proud of who they are and where they come from.  It provides them with a guided path to their adulthood,” said Roy.

Chaperones from each of the communities that attended explained that they felt a sense of pride in seeing young people from their First Nation taking part in the gathering.

“Gatherings like this are good for our youth as it builds their self esteem and allows them to meet new people from our territory.  We are one nation so it is good for us to be able to come together.  I am thankful to Wabun and our First Nation for supporting this event,” said Lisa Ojeebah, Brunswick House FN, Eagle Clan Chaperon.

Chief Gloria McKenzie of Beaverhouse FN attended the gathering to provide her support.  She explained that because of her traditional background of living on the land with her family, it is important for young people today to learn the same values and traditions through events such as the Wabun Youth Gathering. 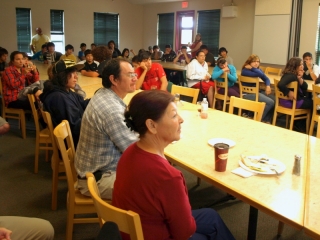 “They are the new generation and they are growing fast so it is important for us to support and encourage them.  Our youth are eager to understand what is happening in their lives and when they listen to others share their life experiences, it gives them the tools they need to deal with the challenges they will face in their lives,” said Chief McKenzie.

Mike Archer, Regional Crisis Coordinator, Wabun Health was the lead organizer of the event and he was assisted by Wabun youth, Wabun Health staff and community members.  He explained that with the first group of youth, part of the role of providing local First Nation members as facilitators was to provide the youth with a resource person in the their home community that they could connect to on return to their First Nation.  He added that the second week’s events, which were mainly constructed around the Yellow Ribbon Dancers, gave the older youth a memorable experience through traditional dance and teaching.

“I think we are starting to see a change in our youth and we are beginning to see them not be as shy as before.  We hope to continue this supportive environment and bring more teachers and traditional people to our youth so that they can learn more about our culture.  Many of our young people have been with us for the past four years and some of the young ones will make the transition to the older group next year.  It is special to watch them grow over the years and to provide a helping hand in their development,” said Archer. 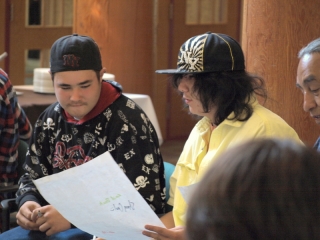 The Wabun Youth Gathering came out of the vision and guidance of the late Elder Thomas Saunders, Brunswick House FN, who wanted to see the Wabun communities coming together in one gathering.  Jean Lemieux, Wabun Health Director spoke to the Eagle Clan gathering during the second week and explained that Elder Saunders shared this vision with her several years ago and that this dream is now becoming a reality through the Annual Wabun Youth Gathering and the additions of the Elders Gathering and the Men’s and Women’s Conferences held each year.

“We are starting to see the formation of the community circle where these gatherings are encompassing all age groups and every member of our First Nations.  This was the vision that Elder Saunders had asked us to follow.  These gatherings are allowing our youth, our members and our Elders to reconnect to our cultural identity and bring the balance that we need in our lives,” said Lemieux.

She added that these gatherings could not be possible without the support of the Wabun Board of Directors, who are the Chiefs of the Wabun First Nation communities.

“I give a big thanks to the Wabun Chiefs for their support over the years and to our Executive Director, Shawn Batise and the Wabun staff.  It would be very difficult to host events of this size if it weren’t for the encouragement and assistance they have provided,” said Lemieux.

“I can see the growth and confidence our youth come away with after these events.  If it were not for them, this would not be a success and we thank them for their participation and we hope to see them again next year,” said Lemieux.